The Trunki Files answers: where to go in Europe at Easter?

A Trunki Files follower recently contacted me asking for advice about where to go next Easter. The brief: 1) must be Europe, 2) preferably Italy, 3) close to a beach and 4) warm, but not too hot. Wish number 4 shouldn’t be too difficult; in 2013, Easter Sunday falls relatively early, on March 31st, and the Med won’t have heated up by then. In fact, it’s unlikely you’ll get a week of unbroken sun anywhere. For the best chance of warmth, you need to head as far south as you can. France, Northern Italy and Croatia are definitely out.

The thing to bear in mind with early (or late) season travel is that, if you intend on heading to a beach resort, many restaurants and shops might not yet be open – be wary in particular of those places served mainly by charter flights (which don’t get started until May and stop in October). Your choice of accommodation becomes much more important – you want somewhere that’s either self-catering or has guaranteed dining facilities. You also don’t want to be surrounded by a sea of empty apartment blocks and closed shops, which would be pretty depressing. I’ve been to Puglia in southern Italy in October and it’s definitely ‘closed’ – the beach clubs have shut up and the beach sweepers have gone home, resulting in some rather desolate and litter-strewn strands.

Taking all this into consideration, here are my top recommendations:

Why? Mallorca has year-round appeal. It’s one of the few Mediterranean islands that doesn’t completely shut down out-of-season (there are direct flights from many UK airports throughout the winter) and there’s plenty to do, whatever the weather. Great days out with kids include the Palma aquarium; the stunning Caves of Drac; the little tram ride from Soller to the sea; the safari park; plus the historic city of Palma itself for shopping and tapas. When the sun does shine, there are hundreds of sandy beaches to choose from and, in April, you won’t be sharing them with the hordes. The sea will be chilly though!

Where? I’d head straight for the Hotel Migjorn. In the South-East of the island, near the Caribbean-esque sands of Es Trenc, this hotel is super baby-and-kid-friendly. Accommodation is in one-bedroom suites with kitchenettes, lounge areas and extra put-up beds / cots provided for the children. Breakfast is included and there is the option of light lunches and evening meals, plus weekly BBQ nights to meet other guests. Best of all for early season stays, the lovely pool is heated in April to 27 degrees, meaning you (or, if not, your kids) can actually go for a swim rather than looking longingly on.

How far? About 2 hours

Most Greek islands don’t open up for business until May, when the charter flights commence

Why? Unlike most Greek Islands, which are served only by charter flights and completely shut down between November and April, Crete is served by scheduled flights from the UK in the off-season, courtesy of Easyjet and Ryanair. What’s more, as the most southerly Greek island, Crete is warming up nicely by Easter. The mountainous interior will still be snow-capped, adding to the dramatic beauty of this diverse and justifiably popular island. It’s big, so what you do will depend on where exactly you stay. For the occasional rainy day, the Cretaquarium, just outside the capital Heraklion, is open all year.

Where? I’ve had my eye on Hotel Ammos for a while now. It has glowing reviews from Mums and Dads on TripAdvisor and is a favourite on babyfriendlyboltholes.com. Right on a safe, sandy beach with an excellent taverna on-site, the Ammos has those little extras that make travelling with kids that bit easier – babysitting, a playroom, family suites with kitchenettes – and the owner, Nikos, is on hand to seemingly sort anything for his guests. The hotel is just a short drive (or a longish walk along the beach) from the historic city of Chania, which will be open for business even if the surrounding resorts areas aren’t – so you’re guaranteed some nice meals and shopping. It doesn’t look like the pool is heated though and sea will still be cold, so don’t bank on much swimming: paddling only.

How far? About 4 hours

How hot? Average high of 20 degrees in April

Why? Like Mallorca, the Costa Blanca doesn’t suffer an off-season in the same way as parts of Greece and Italy. The big expat community and scores of second-home owners ensure flights to Alicante are available year-round from almost all UK airports. This region has some of the best weather in Spain and days in Easter should permit t-shirts, if not swimming trunks. What’s more, the tourist scene is very established here, meaning there are loads of attractions for kids. Benidorm might be your idea of holiday hell (it’s certainly mine) but it is home to theme parks such as Terra Natura and Mundo Mar (the Spanish equivalent of Seaworld), which kids will adore. For more cultural pursuits, both Valencia and Alicante are vibrant cities worth a visit. Alicante has a fabulous castle (alongside its beaches); Valencia has the much-lauded City of Arts and Sciences.

Where? It has to be Caserio del Mirador. A huge hit with The Trunki Files (read our review), the English-owners have created a rare place that manages to enrapture parents as much as kids. Host Sarah will be cooking up her legendary Sunday paellas throughout the Easter holidays, plus there are bunnies and Easter egg hunts. One word of warning – the lovely pool isn’t heated! So only for the brave, the foolish, or the wet-suited in April.

How far? About 2 hours

Why? Malta’s sunshine record – 3,000 hours a year, double London’s – puts it right at the top of the European weather league table, making it a good bet for early season sun. Year-round scheduled flights (with Easyjet, Ryanair and Air Malta) ensure getting there is a breeze. And, though diminutive in size, Malta’s surprisingly large population (ca. 400k) means there’s a lot of ‘real’ life beyond the resorts. The towns and cities are open for business all year and the island’s intriguing history invites exploration (Malta voluntarily became part of the British Empire in 1800 and is still part of the Commonwealth). Not that your kids will necessarily be lapping up the architecture and museums; for them, a novel day out is Popeye Village, the set constructed for the 1980 film. With boat rides, mini-golf and other games, it looks like fun. And – get this – Playmobil actually has a factory in Malta! You can visit and play with loads of their toys – how cool is that?

Where? I’d actually go for the sister island, Gozo, and stay at the five star Hotel Kempinski San Lawrenz. Kempinski hotels are known for their family-friendliness; this one has a heated indoor pool, which is perfect for an early-season stay (the beautiful lagoon-like main pool doesn’t open till May), plus a kids club (‘Renzo’s) with indoor activities to keep them busy should the weather not behave. Gozo itself is quieter than Malta and very small – just 14 km long by 7km wide. However, with small children, you don’t go very far anyway and, what’s more, you can cycle everywhere – a fun alternative to driving. The short boat trip over from Malta, where the international airport is, also makes for a little adventure. Divers take note: Gozo has some of the best in the Med, so take advantage of that kids club and go scuba!

How far? About 3 hours

Why? If it has to be Italy, Sicily is your best best for some heat and sunshine early in the season, not to mention food that both kids and parents will love (spaghetti! gelati!), a volcano (cable car!), Roman ruins, historic cities and sandy beaches. BA, Easyjet and Ryanair all fly direct to Sicily year-round, so getting there shouldn’t be a chore. However, it’s a big island and you won’t cover it all in a week. Where you base yourself will determine what you get to see.

Where? One place that has caught my eye is the Verdura resort. Super-chic, the hotel is on the coast and has a small private beach and a stunning golf course. Best of all, they seem to go the extra mile for families. There are rooms that can accommodate extra beds; they automatically childproof accommodation when travelling with under 4s; and babysitting is on offer. The on-site kids club looks excellently equipped, with playground, football goals and indoor activities for less sunny days; and the spa looks amazing for Mum and Dad. My only reservation is location – it’s 15 minutes from the nearest town of substance (Sciacca) so you’re very much in for a resort-experience here.

How far? About two and half hours

How hot? Average high of 18 degrees in April 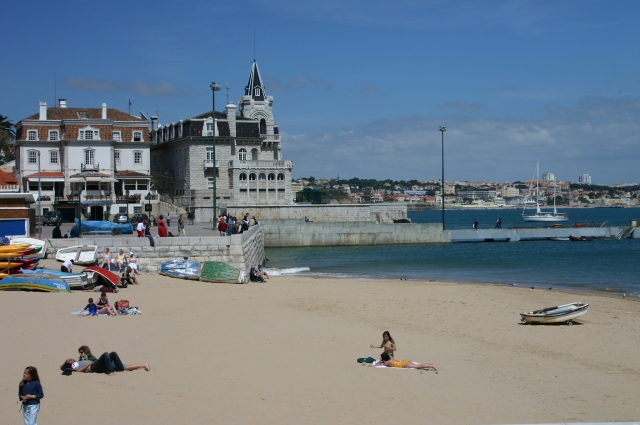 Why? Lisbon an excellent city break option for young children and April is a great time to go: not too hot for seeing the sights but warm enough not to have to wear multiple layers. Transport-wise, it has plenty to keep them entertained. The city’s trams are a fun way of getting around – much better than the underground for sight-seeing; there are boat trips on the Tagus estuary; and for something really different, there’s even a historic public elevator – the Santa Justa – which links the Baixa district with Carmo Square. St George’s castle should be on the agenda – it has stunning views over the city and plenty of ramparts for little ones to explore. The Expo site is another must-see: full of futuristic constructions, there’s a cable car which kids will love. It’s also home to the Lisbon Oceanarium – one of the best on the planet; my wife and I went here without children and loved it. Finally, you must go to Belem and have the custard tarts. Forget the ones in Sainsbury’s, these are the real deal. Warm, crisp pastry, delicious sweet custard and a sprinkle of cinnamon and icing sugar on the top – you’d be surprised at how many you (and you kids) can eat.

Where? The great thing about Lisbon is that you can actually stay on the beach, so you get the best of both worlds and can escape from the hustle and bustle should it all get too much. I’d head for Cascais, a suburb 40 minutes by train from the centre (meaning you don’t even have to hire a car). It’s a lovely place with a long promenade that’s great for walks-with-buggy. The beaches are clean and sandy (it’s a popular weekend destination for Lisbonites) and very accessible. In terms of hotels, the Cascais Miragem looks like a good option. It’s modern, right on the seafront and has indoor and outdoor pools, plus a kid’s club with playroom.

How far? About two and a half hours

How hot? Average high of 18 degrees in April

Related Trunki Files link: Where to go at Easter

1 Response to The Trunki Files answers: where to go in Europe at Easter?