Although as a general rule I would recommend the West Coast every time for a true taste of Scotland, there is plenty to enjoy on the ‘other side’ and proximity to lovely beaches as well as the tourist attractions of the capital make the Fife Coast an attractive option.  At Easter 2011 we went with my Mum to a cottage near Aberdour, mainly choosing this location for its easy access to Edinburgh where we have family, including my grandma.

Linda on the beach in Fife 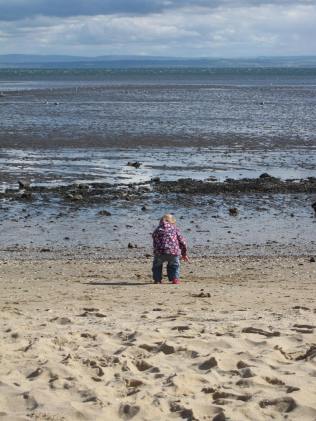 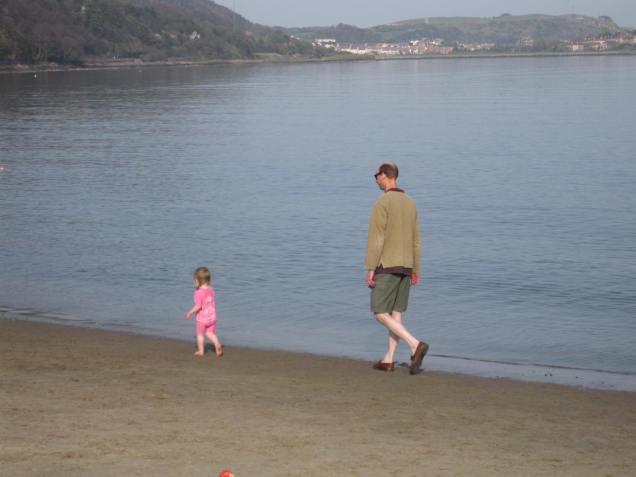 We stayed at Bankhead Cottage near Aberdour, which is located on a working farmyard, and could certainly not be described as having chocolate box charm.  However, although having a bedroom overlooking the cowshed isn’t to everyone’s taste, it certainly kept our girls (then 3½ and nearly 2) entertained in the early morning before disturbing Mummy and Daddy!  The lack of external charm was more than made up for by the stunning views over the Firth of Forth, including the Forth Bridges and planes coming in to land at Edinburgh Airport.

The cottage itself had four bedrooms, a reasonable sized kitchen and beautifully fitted bathrooms, as well as a good range of toys and an enclosed garden at the back.  Furnishings were fairly basic in the holiday cottage style (i.e. a mish-mash of old furniture and IKEA basics) but frankly with children this is a bonus as it means you are not living in fear of spillages and breakages.  The owner was extremely friendly and happy to help – and tractors driving past as well as hares running through the field in front of the cottage kept us well amused when at home.

We arrived in glorious sunshine, and headed straight for the blue flag beach at Aberdour.  It was bustling, with lifeguards, ice cream van, bouncy castle and lots of families having a lovely time.  The girls were soon in their swimming gear and paddling happily, as well as having a good run on the beach.  We also had a lovely time later in the week on the beach at Burntisland, where there was also a play park nearby, an indoor swimming pool and a delightful cafe which we visited a number of times called Potter About.  They did great tasting plates for children as well as huge ice creams and lovely gifts including handmade felt handbags – it would have been rude not to!!  Both Burntisland and Aberdour have train stations giving another option for travel into Edinburgh.   Another practical consideration was met by the large Asda in Dalgety Bay.

Our travels a little further afield included Dunfermline, where we had a good walk through the park to an excellent play area, and St Andrews, which is always a good day out with another super beach, an aquarium and the British Golf Museum if that is of interest.  The coast is dotted with stunning beaches, such as Lundin Links, and pretty harbour villages like Crail.  In the other direction, towards Edinburgh, we spent a very rainy day warm and dry in Deep Sea World, Scotland’s National Aquarium set under the Forth Bridge.  There are also various boat trips running from North Queensferry to Inchcolm Island which would be great for slightly older children (and better weather!)

Off to the Big City

I’m sure I don’t need to list the multiple attractions of Edinburgh, of which the Castle and The Zoo (complete with pandas) are probably the most obvious.  There are fantastic museums and galleries, and a good Botanic Garden, as well as the walk up Arthur’s Seat for the energetic.  We decided to save these for future trips and instead spent a morning at Ocean Terminal in Leith, home of the Royal Yacht Britannia.  Be warned you get a fairly minimal view of the yacht unless you pay (we didn’t) but there is a cinema, soft play, shops and a fabulous food court which was ideal with kids with a good choice of food and plenty of spacious seating areas.  There is also a spa, although why that might be of interest to frazzled parents I can’t think!?

One more attraction worth a mention is the Almond Valley Heritage Centre, near Livingston and just off the M8 between Edinburgh and Glasgow.  We went there because we were meeting family, but it would be a good stop if the journey home takes you in that direction.  There is an industrial museum, farm, multiple play parks and soft play – a great and exhausting day out which would pretty much guarantee sleepy children in the car for at least a couple of hours.  In fact, for the whole week our girls fell asleep just in time for crossing the Forth Road Bridge, missing the excitement of spotting boats and trains on the rail bridge every time.