Once upon a time, my idea of a perfect hotel break would have been a four poster bed, spa bath and long lie in followed by delicious breakfast. But hey, things change once you have kids and I have to honestly say I was just as excited (if not more) than the boys at the thought of holidaying at the Legoland hotel! 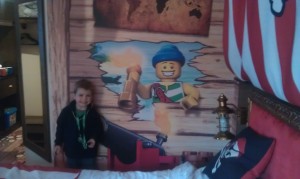 The Pirate room comes at a premium

First up, the negatives – it is VERY expensive, although if you can make the most of a school INSET day or go off-peak it’s not too bad. There are often deals and offers too (we got an extra day in the park for free). We stayed 1 night at £450 for five of us with park entry on two days during May half term. If we’d gone for a themed rather than premium themed it would have been about £50 cheaper.

The decor: We were greeted on arrival by a dragon snorting real steam from its nostrils and it just got better! The walls, carpets and bedding are incredible. We went for Pirate as we’d heard it was the best (other options are Kingdom and Adventure). Our room had a treasure hunt to unlock a chest with Lego packs and special lanyard to collect badges in the park for each child. The hotel rooms were great with a kid zone – bunk beds plus a pull out extra bed, so three children are amply catered for – with their own TV which had the usual kids channels plus a dedicated Lego TV one.

Child friendliness: all the obvious stuff is in place, but we were impressed by things like integrated fold down child size loo seats in room, non-allergenic bedding throughout, pits of Lego to play with in lobby while you check in, 3D Lego figures that ‘speak’ when you jump on pressure pads, pull levers etc and themed everything.

Adult friendliness: Dad was impressed by the high-end bathroom, which alongside 3D Lego parrots etc, featured posh sink and bath. We also had our own end of the room with separate TV and equally cool theming such as a ship’s wheel mirror. We had chosen a park view room, but as the amazing hotel guest only play area was underneath, maybe not the best choice on a warm summer evening!

Food: For dinner and lunch hotel prices are a bit of a rip-off, much as you would expect, but breakfast (included in our deal) was excellent. Unlimited amounts, huge choice, child and adult friendly and more than enough to keep you going all day! 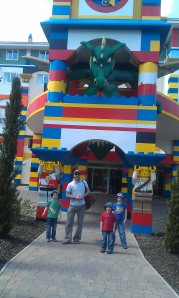 Fun factor: The park itself is always brilliant and an added bonus of staying at the hotel is that you can enter half an hour early to do ‘Atlantis’ and ‘Dinosaur Hunter’. Atlantis is one of the best rides and we did it twice in a row with no queuing. There is also a great mini pool and splash park in the hotel, pirate themed, with water cannons, slides, water-squirting see-saw etc which is great fun. The kids had a whale of a time and we would definitely go back. What are you waiting for?!