Posted on September 18, 2014 by Holidaysking

Club Med’s La Palmyre resort, on the Atlantic coast of France between La Rochelle and Bordeaux, may not be perfect; but I can safely forgive anything that didn’t work on account of the many things that did, says Trunki Files contributor Alison Wood. 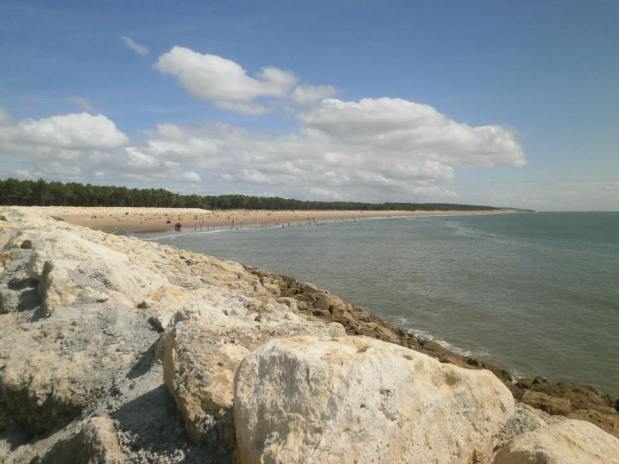 It was principally the location of La Palmyre – nestled between the sand dunes, pine forest and Atlantic rollers at the northern tip of the Gironde estuary – that sold this particular Club Med to  us.

It’s true there was more than a whiff of Hi-de-Hi about the place with plenty of enforced jollity around the pool. Gentil Organisateurs (GOs) boom “Bonjour! Il fait beau, vous etes en vacances.” Cue loud music, lots of dancing and singing, and then game of poolside golf in which participants hit tennis balls at floating basketball hoops in the hope of winning a bottle of Champagne (this is France, remember). Acid jazz and eighties “classics” also accompanied morning aqua-aerobics and, somewhat bizarrely, Beethoven was blasted out through the pine trees. That said, there was no compulsion to join in, it was amusing to watch and – thankfully – it didn’t last all day. 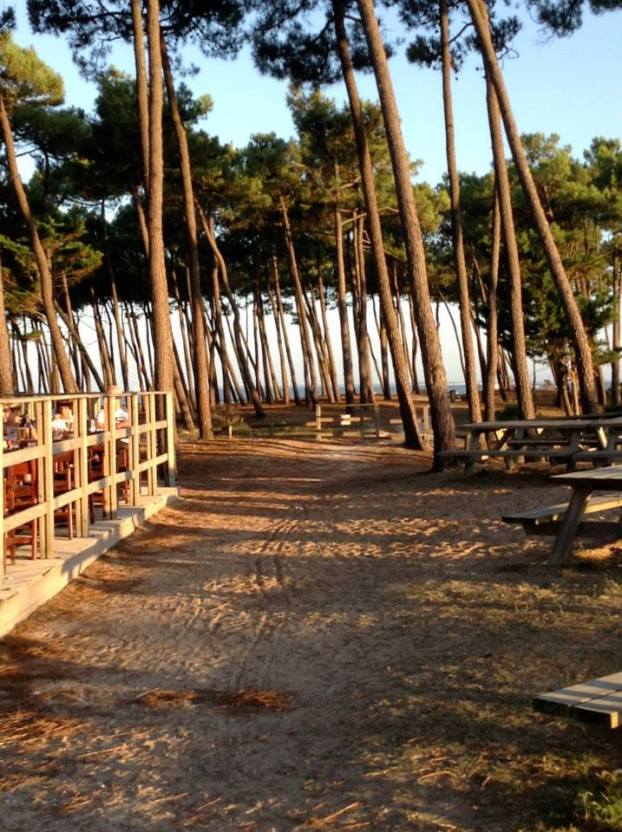 Shade and sand beneath the pines

Whether or not you choose to sign up for the organized activities, there is heaps to do. With two kids aged ten and seven, plus their three year old cousin to entertain, we needed entertainment to cater for quite a wide age range. Monday had a feel of Freshers’ Week with stalls setting out the vast range of activities on offer – from sailing lessons to yoga. Between mucking about in the large pool and body surfing on the beach, we did manage games of tennis and table tennis, a few rounds of archery and a day out on hired bikes along the traffic-free seafront cycle route. That day we were also rewarded with a good lunch at Golfy Restaurant in La Palmyre. The resort had a Decleor Spa but sadly, I never made it. My sister in law did manage an aerobics class and my husband a visit to the gym. 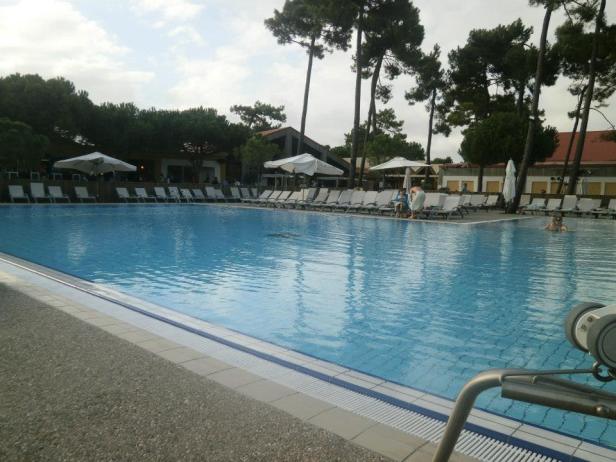 The pool… before the hordes arrive

The theatre put on nightly shows and there was plenty to entertain the kids in the early evenings, with each day themed differently (such as clowns and balloons one day and magic tricks another). My daughter was mesmerized by a bizarre staff rendition of Don Quixote and Africa Night put on by the kids club (which was a kind of techno-Nativity-meets-the-Lion-King). There was also a decent playground set in sand next to the main dining hall. Thoughtfully a row of chairs was placed overlooking the play equipment.

The sea was warm and most days the weather was lovely, plenty of sunshine and in the mid twenties. On the couple of dull days the Club Med GOs went into cheerful overdrive – offering Champagne on arrival at breakfast and freshly blitzed banana milkshakes for the kids. Having cars we headed up to La Palmyre town where there was a massive market in progress but, with three kids in tow, we headed for Youpi-land, which offered unlimited playtime on ride-on trains and the biggest collection of inflatables I have ever seen. All for less than ten euros. More erudite was La Palmyre zoo next door to the resort. My daughter and I spent a fascinating day there. Although zoos always leave me morally queasy La Palmyre was a pleasant surprise. I didn’t really agree with their policy of selling popcorn to feed animals but it did mean they were very tame. The site was impressive, the array of animals wide and the spacious enclosures thoughtfully and creatively arranged. There were also parrot and sea lion shows. 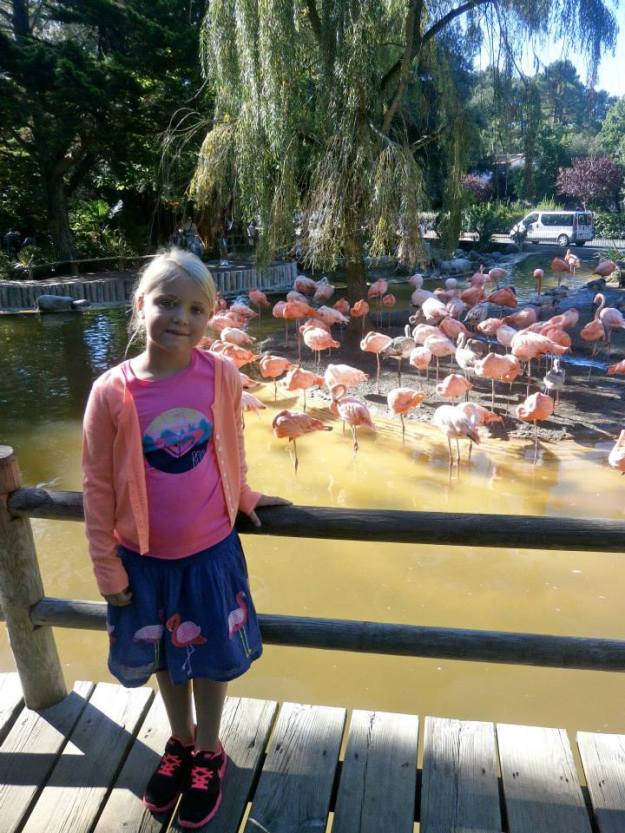 The rooms were basic and wouldn’t win any architectural awards but they were spotlessly clean and set with some care amongst the pine forest. There was some bureaucracy with laminated tickets surrounding the allocation of pool towels. In keeping with our national stereotypes, the English adhered strictly to the one ticket, one towel rule; the French ignored it; and the Germans avoided it because they came down before the pool hut opened and put their own towels on their favoured sunloungers. OK, so I made the last bit up, but there was definitely a drive to secure a sun lounger by 11.00 am on hot days.

Club Med offers a phenomenal catering operation that surprised and impressed us in quality and variety. The quantities were somewhat breathtaking. The bread and croissants were as good as you would expect. Fear not, there was pasta, tomato sauce and bolognaise available every day should you need it. Whilst the inclusive table wine was best avoided, this being Bordeaux there was a very good a la carte wine list and plenty of advice on choosing.

It’s testimony to the buffet when our night in the a la carte restaurant was our most underwhelming culinary experience – although it did offer peaceful sunset views and respite from the hectic aircraft hangar buffet restaurant that was as much an anthropological as it was a dining experience. Each day featured the kind of staples you’d expect but there was also at least four or five dishes of the day to try. So, one night brought a massive seafood buffet with oysters, whelks, mussels and prawns galore. Another night brought massive portions of cote de boeuf cooked with some aplomb outside the restaurant. The range of cheeses, salad and fruit was varied too and there were several mouthwatering tartes du jour. The coffee and tea was rubbish (unless you were into herbal infusions) but the didn’t really matter when the mojitos were free, along with most other drinks at the bar. Juice and water was available round the pool all day. And, just in case you didn’t get enough at meal times, there was Happy Croissant elevenses, afternoon tea and sundowner snacks to accompany the local tipple Pineau (wine fortified with cognac).

Watching a balmy sunset as the kids hurled pine cones at one another, my husband waved an expansive arm that took in the picturesque scene and remarked that it wasn’t fair: the French were so lucky have all this. And wine. And snow. On my sun lounger I had been reading Paul Theroux’s latest book on travelling in Africa with its lurid accounts of Angolan slums and rural Namibian poverty. Looking up on the last day and seeing the tanned, happy, pan-European selection of holiday makers splashing in the pool and helping themselves to the generous supply of food and drink, I concluded we were all pretty lucky. 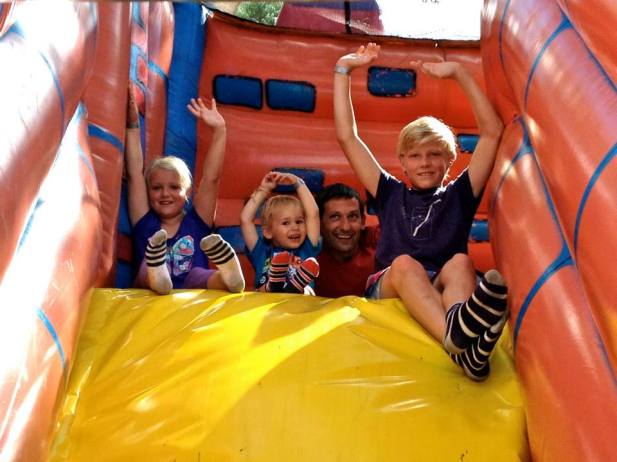 Plenty of fun on the inflatables