Why Hamburg is heaven (and not just for 7 year olds)

Think European mini-break and I bet you Hamburg doesn’t spring to mind. Paris, certainly.  Rome, definitely. Barcelona, absolutely! But this industrial port city in northern Germany won’t be anywhere near the top of your list of must-see cities (if it makes it onto your list at all).

Let me let you into a secret: it should be, for one simple reason. It’s home to one of the most amazing exhibits you, and your kids, will ever see, the incredible Miniatur Wunderland.

I am deliberately referring to kids in this article as I do not believe for a second girls will not enjoy this place. That said, I actually went there as on a multi-generational boys trip with my Dad and my 7-year old son Leo. The idea came from my Mum as a present for my model railway-loving father. She’d heard that Hamburg was home to the largest model railway in the world and asked me whether she should buy him a trip there for Christmas. The more I looked into it, there more I realised it was not just my Dad who would love it. Lego-obsessed, transport-obsessed, city-obsessed  Leo would love it too. And being my father’s son and son’s father, there was no way I was missing out on this either.

A YouTube search later, I was sold. Miniatur Wunderland looked truly incredible – it wasn’t just a miniature railway, it was a miniature world, complete with cities, mountains, deserts and – most recently – a fully functioning airport. My mind was blown. Easyjet flights to Hamburg were booked; hotel reserved; tickets procured. We were going!

Beyond the excitement of visiting Wunderland, I knew our Hamburg adventure was going to be something special. I couldn’t recall the three of us ever spending time together like this. The significance was not lost on Leo, who yelped with excitement when we told him (following clarification that his younger sister and brother would definitely not be accompanying him). He spent the time since Christmas counting down the days.

In the meantime, I started doing some research into Hamburg and what else this city could offer three lads with ages spanning 6 decades, not intent on living it up on the city’s notorious Reeperbahn. I learned about the city’s incredible port and how you could get up close and personal to the cargo ships and cranes by taking a boat tour. Perfect! That was Saturday sorted, leaving Sunday for the main event.

The Easyjet flight timetable from Gatwick works perfectly for a one-night break away. Leaving at 8am on Saturday morning, and returning in at 7pm, it avoided a hideously early start (but just early enough to make it exciting for Leo) and could be squeezed into a regular mid-school-term weekend.

I had decided the whole weekend was going to be transport-themed, so we started off our adventure at The Wonder Tree café in south terminal at Gatwick. I can highly recommend this place as it sports prime views of the runway; we happily watched the planes take off and land (Leo naming the airlines with super-geek aplomb) as we tucked into egg and bacon sandwiches; plus the complimentary kiddie pack including some cardboard binoculars was appreciated. 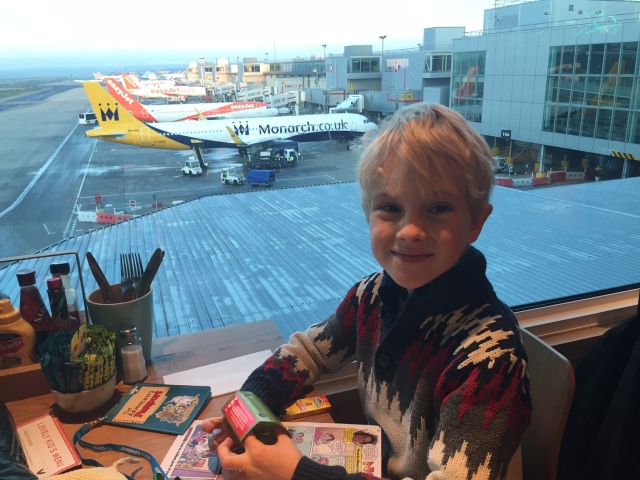 The flight to Hamburg was quick – just over an hour – and before we knew it, we were onto the next form of transport, the S1 train direct to the centre of the city. At a cost of about 8 euros for all of us, this was cheap, efficient and enjoyable for train-fanatics.  We headed straight to our hotel to drop our bags before getting on with the rest of our explorations. I had booked the Adina, a modern aparthotel within walking distance of an S1 station (Stadthausbrucke) and Miniatur Wonderland itself.  I can highly recommend this place, not least because it was clean and modern, but because it offers one-bedroom apartments, meaning there was ample space for the three of us (Leo went on a put-up bed in the lounge). Plus it has that essential of any kiddie-friendly minibreak, a swimming pool.

Bags dumped, our next stop (after a brief visit to the exceptional bakery next to the hotel, home, according to Leo, to the ‘best bread in the world’) was the port. Expecting to find a fairly low-key place with one boat offering hourly trips, we were amazed to be confronted with tens of ‘Stadtrundfahrt’ tour buses, hundreds of people milling about and a bewildering choice of boat trips to choose from. This was clearly what you did in Hamburg. After a quick reconnaissance, we made our choice, negotiated a discount (“das Kind geht kostenlos, ja?!”)  and off we sailed.

None of us has appreciated just how massive Hamburg’s port is (the second largest in Europe after Rotterdam apparently) and a boat trip is the best way to get the sense of it. You start by cruising through some of the canals of the Hafencity, Europe’s largest regeneration project, before heading out to get up close and personal with some massive container ships. Leo was transfixed and insisted on standing up on the bridge, until her realised he was freezing and retreated to the (thankfully) heated cabin.

Getting up close and personal with the cargo ships

At about an hour, the boat tour is just long enough to keep kids’ interest and a great way to spend an afternoon. But, by the end, we were cold and damp and had our sights on the cakes we’d seen back the bakery next to our hotel. So we filled up on custard and apricot slices and headed back to the hotel to use the ‘wellness area’. Leo loved the Jacuzzi and even had his first experience of a sauna (much to his displeasure).

There’s a restaurant in the hotel which looked fine but that evening, for dinner, we decided to walk 5 minutes up the road to the Grossneumarkt, where there’s a bigger choice of places to eat. We found a cosy pub-type place, Thamers, serving authentic German grub and good beer and finished off a happy day playing hangman and eating a lot of fried Kartoffeln.

Whether this place was to blame for what happened next we can’t be sure but unfortunately, disaster-struck. During the night, Leo got sick. Everything that had gone down came back up, with clockwork regularity. Leo was knocked for six and it’s fair to say the rest of our trip was fairly compromised; Leo spent the next morning throwing up and/or sleeping and maddeningly there was little we could do for him. However, he was determined to get to Miniatur Wunderland, as were we all (what about the Trunki Files review?!), so we ploughed on and made it there by hook or by crook.

My top tip for a visit to Miniatur Wunderland is to reserve your entry time. It’s a slightly bizarre system in that you book your arrival slot (in one hour windows) online but you don’t actual pay for your tickets till you get there.This means there is absolutely no risk in reserving and you can potentially save yourself long waits to get in (wet weather weekends are the worst for crowds). We actually missed our reserved slot due to Leo being ill but when we decided to attempt to go later that day, I went online and managed to get a new slot, saving us 80mins waiting time from just turning up.

Spot the difference: the real harbour…

Once inside Wunderland, there are 3 floors to discover, but the majority of the action is on the top floor. Here you work your way through displays ranging from a re-creation of Hamburg, to scenes from the Austrian mountains, Switzerland, Sweden, the USA and the piece de resistance, an airport. The airport really puts the ‘wunder’ into the miniaturisation. We could have been back in the restaurant at Gatwick. Planes actually take off and land. They taxi. And buses come to collect passengers, trucks come to collect cargo. There’s even a fire that the emergency services have to attend to with much fanfare and siren-ing.

I was in awe. Dad was in awe. Even sick-as-a-parrot-Leo was in awe. And it got better. Every five minutes or so, the sun sets on the whole of Miniatur Wunderland; lights dim and the place enters night mode. City lights sparkle and fun fairs, night markets and shop windows come to life; and the airport becomes even more mesmerising as planes come land with their lights beaming down the runway.

The detail of the models is incredible. The more you look, the more you see. Every square inch is a scene which has been thought through – a couple kissing in the park; someone working at their desk through a window; a group of friends raising their glasses in a Biergarten. A lot of this detail is, of course, lost on young kids – it’s overwhelming enough for adults; but that doesn’t matter. There are plenty of buttons for them to press to make things light up or move, giving them more than enough distraction. And thoughtfully, throughout the exhibit, there is a raised platform for little legs to stand on, meaning little ones never miss out on a good view of proceedings. 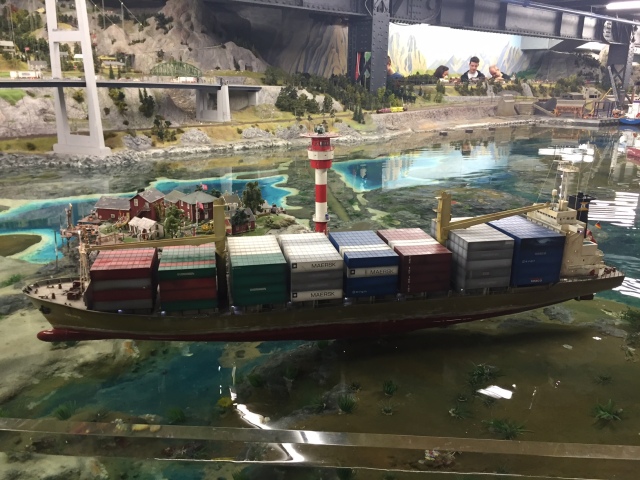 All in all, a visit to the Wunderland will take about 3 hours;  short attention spans may get round in two but the substantial gift shop and café will divert them a while longer. The memories, of course, will last forever. Now he’s back home, and better, Leo is full of the place, even given the limited amount he managed to see. 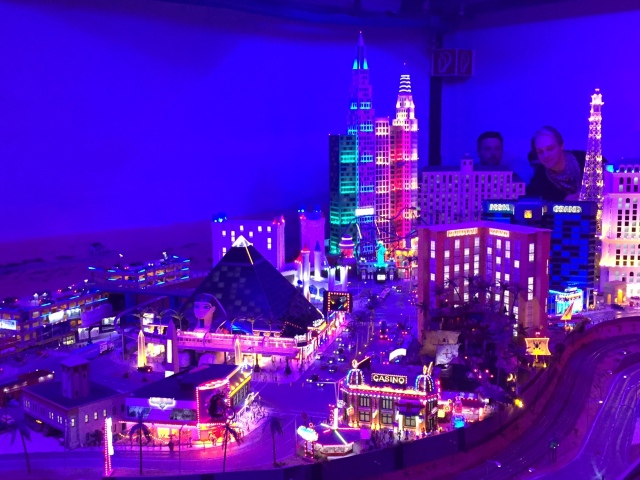 So there we have it. Hamburg. A bucket-list destination for young (and not-so-young) kids. Who knew? Fortunately, I did. With convenient flights and just enough to keep you busy for 2 days, it’s the ultimate mid-term European mini-break which actually knocks the socks off some of the ‘more established competitors’. Paris may have the Eiffel Tower, and Rome the Colosseum, but only Hamburg has a 747 that can take off in 3 metres.