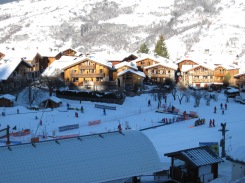 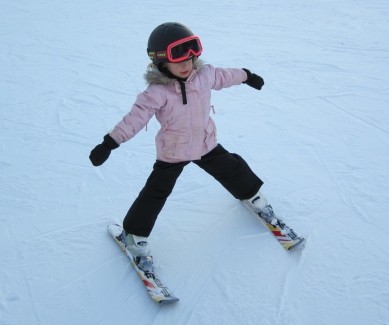 View from our bedroom balcony

If you have read my previous posts, you will have realised that our extended family play a significant part in our holiday planning.  Last Christmas, the all-encompassing family holiday reached new heights (figuratively and literally) when my in-laws asked if we wanted to join them in the Alps to celebrate their Ruby Wedding, along with my husband’s siblings and their children.  Frankly, not a difficult decision, particularly for my husband who is a dedicated snowboarder.  I was very happy to go along for the ride, knowing at least I would have some company and that if nothing else it would be pretty.

Surviving the 12 hour journey was the first achievement – the girls enjoyed the Eurotunnel and the crossing is very short, we had a reasonable night in a hotel and didn’t need the snowsocks at all.  The return journey was a bit more eventful with deep snow, closed roads and me in the shivering/sweating phase of flu, but we still made it home in one piece and, in fairness, the girls were superbly well behaved.  New Year’s Eve dinner in KFC Folkestone was a low point.

Christmas Eve found us all assembled in Chalet De La Vanoise in Montchavin-Les Coches.  There were three grandparents, three sets of parents and six children ranging in age from 6 to 2.  The chalet was well-suited to such a party, with separate areas with bathrooms and plenty of space, cbeebies available on the TV (a godsend in the days to come) and plenty of room for us all to eat and sit in the living space.  We self-catered, apart from the last night when the adults had a very nice catered meal, and each sub-section of the family catered a couple of meals through the week.  For experienced skiers, the chalet really was ski-in, ski-out, although for non-skiers the walk back from the village was either steep and slippery or involved crossing a piste.  There was space in the garden for making snowmen etc, but I had a rather frightening experience on the last day when a group of off-piste local skiers came hurtling down the garden path and through the narrow gap by the cars which I was clearing of snow; had Alice, aged 2, still been playing out in the snow it could have been very nasty.  The owners were friendly and helpful, and organised ski-lessons etc in advance, but seemed completely unfazed by this incident which makes it hard for me to recommend the chalet whole-heartedly.

The resort of Montchavin Les-Coches was lovely – from Father Christmas in the village on Christmas Eve, to the ‘snow gardens’ for children to ski and sledge, and stunning views over to Mont Blanc.  The chalet took full advantage of those views, with a view out of the lounge window of the cable car to Les Arcs.  With access to the La Plagne and Les Arcs ski areas there was plenty to explore for the snow bunnies in our party – and plenty of different levels of challenge for the experienced skiers and snowboarders in our party, as well as two adult novices who had ski and snowboard lessons.  There were enough ski lifts to make it relatively easy for trips back to the chalet for lunch.  The cable car between Montchavin and Les Coches kept the youngest children amused, and there was an ice rink at Les Coches as well as an indoor pool in Montchavin.  As a family group we didn’t make much of the nightlife, despite a number of restaurant recommendations from the chalet owners.  However, we found self-catering straightforward with an adequate supermarket and a bakery which delivered plentiful breakfast supplies each morning.

Our original intention was for all the children to go to ski-school/crèche each morning, starting on Christmas morning.  The two older cousins (five and six) were fine and by the end of the week were skiing down the mountain quite confidently.  My oldest, Charlotte, then 4, started off in the same class as them, until the instructor decided she was too young and moved her into a younger class where the other children were all French.  I would have predicted this being a complete disaster, but she obviously has her daddy’s skiing genes as she coped very well with the long, cold morning, and by the end of the week was very happy to show off her snowplough and come out in the afternoon with us for more skiing.

The three younger children started off in crèche but in the end we decided that they really weren’t ready for skiing lessons and that there were enough of us to look after them for free!  The youngest in the group was Alice, our younger daughter, then 2 and a half, and she wasn’t particularly well for the whole week, so my dilemma about whether to take ski lessons myself was resolved by having a toddler who broadly speaking wanted cuddles on the sofa most of the time, only coaxed out for the occasional ride on the cable car.  She really did want to have a go with her ‘pink snowboards’ though, and I’m sure in a couple of years will be ready to hit the slopes with gusto.

One of my main concerns was that either I would resent my husband spending so much time on the slopes, or I would cramp his style and stop him making the most of the opportunity to ski.  However, in reality, I really enjoyed seeing him with his family in their element.  I suspect he would have been out for longer without me and the kids, but I also know he enjoyed the time spent sledging and playing in the snow, and he now has a glimmer of hope that ski holidays will feature in the future family holiday plans.  I would happily go back to Montchavin as I rather like the idea of being on familiar territory, particularly if I did take to the slopes in anger for the first time since primary school.  On the other hand, I could just sit in a cafe with hot chocolate enjoying the view!